Well…Thanksgiving as a holiday seems to be fading into oblivion…The Hallmark Channel started running Christmas movies November 1 and now, instead of waiting for the traditional “Black Friday“, many retailers are opting to join those retailers who saw favorable sales last year by opening on Thanksgiving evening and starting their Black Friday deals on Thursday!

Whatever happened to the traditional Thanksgiving?  No stores open for shopping except a few grocery stores so that you can pick up that can of cranberry glob that everyone serves and i’ve never seen anyone eat!  Now Wal-Mart, which is always open, will start their Black Friday deals at 6:00 p.m., Macy’s is opening some stores, Target and Kohl’s as well.  Is it really the wave of the future?  I know there has been some panic because of the late date of Thanksgiving this year (the 28th – Happy Anniversary Mom and Dad – 51 years! and Happy Birthday to my cousin Angie who was born the day my parents married!) only leaves 3 weeks between the holiday’s, but it seems that we are trying to wipe Thanksgiving off the calendar!  Maybe it’s the turkey’s idea…hmm, something to think about!

Will you be shopping on Thanksgiving?  Are the deals really worth it?  Would love to hear from you!  Me…I’ll be watching movies and lounging…in my very best sweats! 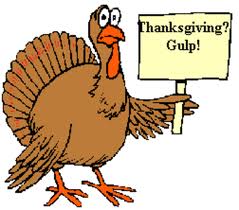 One thought on “Aren’t we pushing it just a bit?”