Today, time released the finalists for their 2013 Person of the Year…The award is given to “the person who’s had the most impact on events this year for better or for worse,” Time Managing Editor Nancy Gibbs said Monday…I’m not sure that explains why Miley Cyrus is included with Pope Francis.

Have we become a society that is more interested in psuedo-celebs (Yes, I’m talking about the K’s) and the misbehavior of a brat, no matter how talented?  To name them Person of the Year?

The tradition of selecting a “Man of the Year” began in 1927, with Time editors contemplating newsworthy stories possible during a slow news week. The idea was also an attempt to remedy the editorial embarrassment earlier that year of not having aviator Charles Lindbergh on its cover following his historic trans-Atlantic flight. By the end of the year, it was decided that a cover story featuring Lindbergh as the Man of the Year would serve both purposes.

Since 1927, individuals, classes of people, a “Machine of the Year”, and “Planet of the Year” have been selected for the special year-end issue. Despite the magazine’s frequent statements to the contrary, the designation is often regarded as an honor, and spoken of as an award or prize, simply based on many previous selections of admirable people making an impact of society.  There has also been such controversial figures as Adolf Hitler, Joseph Stalin, Nikita Khrushchev and Ayatollah Khomeini have also been granted the title.

In 1999 to become more “politically correct”, the title was changed to Person of the Year. However, the only women to specifically win the recognition have been “The Whistleblowers” (Cynthia Cooper, Coleen Rowley and Sherron Watkins, in 2002) and Melinda Gates (jointly with Bill Gates and Bono, in 2005). Before then, the title was changed four times and these ladies were granted the title as individual “Woman of the Year” – Wallis Simpson(1936), Soong May-ling (1937), Queen Elizabeth II (1952) and Corazon Aquino (1986).

I’m saddened by our collective fascination with celebraties, the truly talented live their lives well, want respect for their privacy, work as hard as most of us do daily and just try to live their lives.  Those like Miley…simply show that we have become a society with little self-respect and a need to be in the spotlight.

Who do you think should be this year’s Person of the Year? 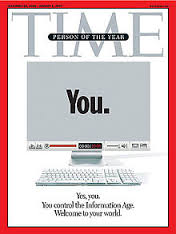