…and we are hosting it right here in Indy!  Are you going?  As an Indiana fan, I’m disappointed in their performance this season, but I am not a fair weather fan and will continue cheering them on despite their record this season.

2014 is the ninth time Indianapolis has hosted the Tourney and the first game tips off at noon on Thursday with 8th seeded Indiana taking on 9th seeded Illinois…click here for the brackets to follow all the games!

Just remember, while each team participates in the tournament and the winner receives the conference’s automatic bid to the NCAA Tournament, but the team (or teams) that finish at the top of the regular-season standings is the Big Ten Champion. The bracket is seeded according to the final regular-season standings with the conference champion earning the top seed and the top four finishers receiving first-round byes.

Not going to the games, you can find the games covered by 4 different networks.  BTN will carry the opening 2 games as well as 2 primetime games on Friday.  ESPN2 will cover Thursday’s primetime matchups, ESPN will carry Friday’s afternoon games and CBS Sports takes over on Saturday for the semifinals and Sunday’s championship game.

So…are you going to the Fieldhouse to catch your favorite team? 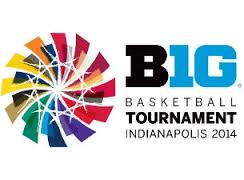