“Video Killed the Radio Star“?  It was the first video played on MTV, August 1, 1981…music and music television has come a long way since…today, they don’t play much music!  I’m beginning to feel like “Reality TV killed the TV Star”.  Have you noticed how much “reality” programming is on your television?

Wordiq.com calls reality television “a genre of television programming in which the fortunes of “real life” people (as opposed to fictional characters played by actors) are followed.”  Wikipedia lists reality television as “a type of television programming that presents purportedly unscripted melodramatic or “humorous” situations, documents actual events, and usually features ordinary people instead of professional actors, sometimes in a contest or other situation where a prize is awarded”.

Viewers are attracted to this particular type of television series for a myriad of reasons. But the popularity has increased over time and the genre continues to evolve as producers brainstorm up scenarios and premises for new shows each week. The genius in producing this type of programming is that it can be customized to any viewing audience, of any age and interests including cooking, dancing, survival, fashion, home improvement, adventure, family life, weight loss etc.

The popularity of a reality TV series is directly affected by the level of involvement of the audience and the  subjects that are explored as the cast of show interacts. The audience must connect with the characters on some level for the show to be successful. Reality shows in recent years have incorporated audience interaction methods in the form of voting online or texting as a method of determining the outcome of the show.

This voting may be used for ratings, elimination of a cast member, or in some other aspect of the show. Viewers are often encouraged to interact on social media sites and receive updates concerning the show which entices the audience to have a heightened sense of involvement in their favorite shows and retain the interest of the viewers. This interaction also provides data to producers to determine what types of programming viewers might want to see in the future.

The more popular a series becomes, it can be syndicated to a national audience, spinoff shows created, and in the end spill over into other media outlets such as video and dvd sales. Merchandising is incorporated to cash in on the show’s popularity. As a show declines in popularity it may be cut from a network or bumped to a less desirable time slot.

Audiences are drawn to reality shows for the drama, shock factor, raw human emotion, to see how every day normal people react to abnormal situations using their personal morals and decision making skills. This leaves the viewer at home wondering how they themselves would have handled the situations they see portrayed on the screen and is generally discussed between friends and coworkers the next day.

As reality television shows branch out into every possible subject matter, social boundaries are tested and acceptable moral codes are broken as producers attempt to create shows that will compel the interest of the American viewing public. The affect that this has on the younger generations is more pronounced as they are more susceptible to the influence of these shows…for better or worse.

Ultimately as a source of entertainment audiences are affected by both the negative and positive natures of these shows. Repeated and regular exposure to either type will influence those watching and result in the imitation of good or bad qualities exhibited by the characters on these shows.

Some level of scripting or directing is involved in the production of a reality television series it is regularly argued that they are not in fact based on reality and will result in the audience believing what they seen on the television screen to be completely normal, acceptable and real…when the truth is that all of these shows contain an element of embellishment to make the show more enticing to it’s viewers.

Reality (pun intended) is reality television shows are less expensive to produce and can have a much larger payout over time depending on the level of popularity of the show. This makes it a steady source of income for most television networks and will continue to be used to grow their business in the future. For good or bad reality television shows appear here to stay and will continue to evolve with it’s audiences as controversial and important topics are explored through this unique social media outlet.

I admit, I love HGTV and my favorite “make-over” “reality” show has been What Not To Wear for many years, but do we really care about Honey Boo Boo?  Why does anyone want to keep up with the Kardashians?  Or do we need to know more about multiple women marrying 1 man on Sister Wives?  I wonder…is the fact that Snooki even exists as a television personality truly a sign of the Apocalypse? 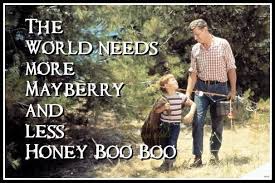